10 Tips for Travel Etiquette in Germany 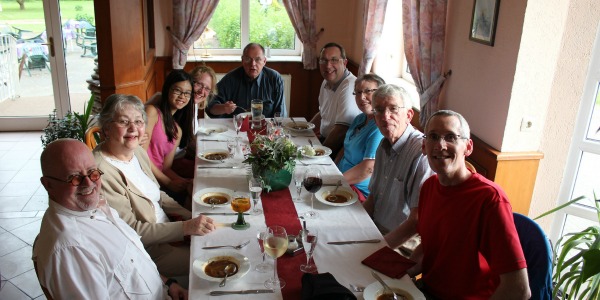 Each country has its own unique customs and cultural etiquette and it’s useful to know what those rules are. Here are some suggestions to help you make the most of your trip to Germany:

Tip 1:  Greet Germans formally
Germans are much more comfortable with a hand-shake, than a hug. This also applies to greeting children. It’s important to maintain eye-contact when greeting Germans. Start by using titles, such as Herr (Mr.) or Frau (Ms.) with their surname, unless they invite you to use their first name.

Tip 2: Just say hello
Simply say “Hello” (Guten tag) and avoid questions like, “How are you?” especially when you are greeting strangers. They don’t chat in the check-out lines in the store like Americans. The quicker you are in that line, the better!

Tip 3: Avoid awkward conversational topics
Germans aren’t much for small talk and they don’t tend to talk about their personal lives and families. We also suggest avoiding talking about politics, money, and war. They do enjoy talking about their wonderful country!

Tip 4: Don’t ask for tap water
When you are in a restaurant order still or carbonated bottled water, as it’s considered stingy to ask for tap water.  Don’t take the bottle home though, as the restaurant will lose their deposit. If you purchase water from a store, you can return the bottle to a store to get the refund (25c).

Tip 5: Don’t be late
Germans are very punctual, so avoid being late for any appointments or tours. You will love the German efficiency!

Tip 6: Take your elbows off the table
It’s polite to rest your hands on the table, but not your elbows. Germans, like many Europeans, use their knife and fork to cut most things (including pizza). They use their fork in their left-hand and the knife in the right. Bread is the only food eaten with their hands. When you have finished your meal, put your knife and fork side-by-side on the plate.

Tip 7: Don’t stand so close to me!
Privacy and personal space are very important, so remain at least an arm’s length away and avoid touching, as it’s seen as an invasion of privacy. They also don’t like effusive compliments, but you can certainly thank tour guides and give them a gratuity.

Tip 8: Shop 6 days a week
Shops are generally closed on Sundays, unless it’s a primarily tourist area, so make sure that you get your shopping done during the week. It’s easier to buy things with Euros than with credit cards, so it’s good to travel with cash.

Tip 9: Wait for the green light
It’s illegal to jaywalk or cross the street when the traffic light is red. It’s also forbidden to walk in the bicycle lane and you might get hit by a cyclist!

Tip 10: Say no to gum
It’s considered impolite to chew gum while talking to someone, so save it for the bus, or when you’re not conversing with Germans. You should also avoid putting your hands in your pockets while chatting.

Germany is a fabulous place to visit and we invite you to join one of our tours.