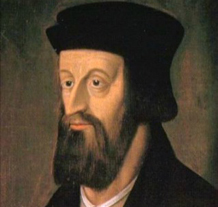 Hus’s fiery determination to stand up for truth laid a foundation that led directly to the Reformation. The last words of John Hus were that, “in 100 years, God will raise up a man whose calls for reform cannot be suppressed.” It was almost exactly 100 years later, in 1517, when Martin Luther nailed his 95 Theses of Contention onto the church door at Wittenberg. Because of the prophecy of Jan Hus, (whose name means ‘goose’), a swan is the traditional symbol of many Lutheran congregations, although, Luther’s Rose is also popular.

Hus’s early years
Jan Hus was born in the village of Husinec click here in southern Bohemia (today part of the Czech Republic) from which he took his name. In Czech the word “hus” means “goose.” His parents were peasants—nameless and unknown. His mother taught Jan to pray and, as he grew older, influenced him toward a career as a priest.

Hus the student
Hus started his studies at Charles University in Prague in 1390. In 1393 he became a bachelor of arts and a year later a master of liberal arts. Hus recounts his poverty while studying at the university in Prague: “When I was a hungry young student, I used to make a spoon out of bread in order to eat peas with it. Then I ate the spoon as well.”

Hus the priest / Hus and Wycliffe
Meanwhile, King Wenceslas’ sister, Anne, married Richard II of England in 1382. When Hus’s hotheaded friend Jerome of Prague returned from Oxford University, he brought many of Wycliffe’s writings. They struck a chord with Hus and he hand copied many of these writings for his personal study. He agreed with Wycliffe that all people should be able to read the Bible in their own language. At that time, the Roman church threatened to execute anyone found reading the Bible in anything but Latin.

Hus became a priest in 1400 and began preaching in Czech at Bethlehem Chapel in 1402. He was a popular preacher and the congregation was often more than 3,000 people. He preached godliness and openly criticized the clergy, saying, “These priests…are drunks whose bellies growl with great drinking and are gluttons whose stomachs are overfilled until their double chins hang down.” On December 20, 1409 the Pope issued a bull ordering all of Wycliffe’s books to be burned and forbidding his teachings. The Czech people were incensed and there was an uprising. Hus continued to preach and his support grew, despite the entire city being excommunicated.

Hus in exile
In 1412. after the papal ban, Hus left Prague voluntarily and preached in the countryside and in small village churches, visiting towns such as Sezimovo Usti. Hus was not without his supporters, notably the Czech king Vaclav IV. During this time he published his most famous work De Ecclesia (concerning the church). In this work he stressed that Christ is the head of the Church, not Peter. He also challenged the power and authority of the pope and cardinals.

Hus’s condemnation
On October 14, 1414 he began his journey to Constance joined by 30 riders. He had been promised safe passage by the Emperor Sigismund. He arrived on November 3, 1414. Three weeks later, however, he was arrested and taken to a dank dungeon where he remained in chains for seventy-three days. His cell was next to a sewer and he spent those weeks in hunger and poor health. It was only when the pope’s physician visited, that he was moved to a better cell. The first trial was on June 5, 1415 at the Franciscan monastery. On July 6, 1415 he was led into the Cathedral. A total of 30 charges were leveled against him, mostly false, including the charge that he’d referred to himself as the fourth person of the godhead. Repeatedly asked to recant, he refused unless convinced by scripture of his errors. His priests vestments were put on him, then ripped of and destroyed, as the priests declared that they were committing his soul to the devil. He was given a paper hat with pictures of the devil to wear, with the inscription ‘haeresiarcha’ ( One who originates or is the chief proponent of a heresy or heretical movement). The Council of Constance also condemned Jerome of Prague and John Wycliffe. 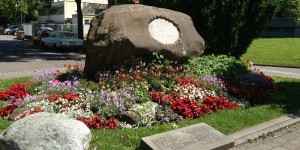 Hus’ Martyrdom
On July 6, 1415, Hus’s hands were tied behind his back with ropes and a chain was placed around his neck. Wood and straw were placed all around him. Wycliffe’s writings were used as kindling for the fire. Before the fire was lit, Count Palatine gave him one last chance to recant. He responded, “God is my witness that the evidence against me is false. I have never thought nor preached except with the one intention of winning men, if possible, from their sins. Today I will gladly die.” As the flames began, he sang in Latin, “Christ, thou Son of the living God, have mercy upon me.” His ashes were scattered in the Rhine river.