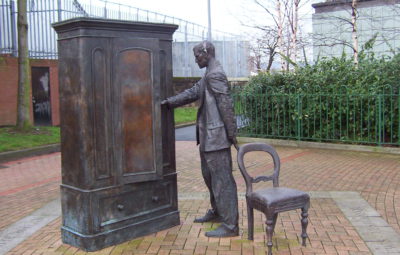 C. S. Lewis (1898-1963) was one of the most influential writers of his day and is considered to be on the of the intellectual giants of the 20th century. He wrote more than thirty books, including the much-loved Chronicles of Narnia series, which have sold over 100 million copies. Other books include Surprised by Joy, The Screwtape Letters, Mere Christianity and poetry published under the pen name Clive Hamilton.

He was born in Belfast, Northern Ireland on November 29, 1898. He had one brother, called Warren.  The family moved to a house called “Little Lea” when he was seven, and a hand-carved wardrobe from that home is said to have been the inspiration for The Lion, The Witch and The Wardrobe. It was not an easy childhood, as he was sent to boarding schools in England. Those experiences, plus wartime horrors fighting in World War 1, contributed to his atheism.

On returning from battle, he attended University College, Oxford, and excelled at his studies, becoming an English Literature Professor. It was here that friends J. R. R. Tolkien, and Huge Dyson, persuaded him to look again at the Christian story. September 22, 1931 is the day that he marked as the day that he came to believe that Jesus is the Son of God.  A few years later, in April 1940, the friends began meeting weekly for informal discussion. The group was called “The Inklings”. Visitors to Oxford can see the room where they gathered in the Eagle and Child pub.

In 1956, he married an American woman called Joy Davidman Gresham, who was suffering from cancer. She unfortunately lived for less than 4 years after the marriage. He passed away suddenly, from renal failure, on November 22, 1964 and was buried in Holy Trinity Church, Headington, which is just outside Oxford.